In 1704 philanthropist Elizabeth Fuller of Watford founded a charity school on land adjoining the parish churchyard. The original building, which was known as The Free School, may still be seen. The 40 boys and 20 girls were taught to read, write and 'cast accounts'. Every year we hold a Founder's Day service to commemorate the charitable foundation of Watford Grammar School for Boys. 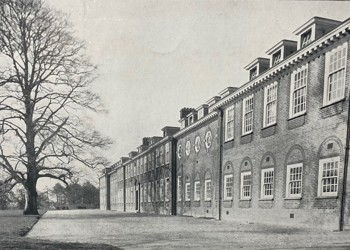 With the help of endowments and occasional gifts, Elizabeth Fuller's original charity school survived until the 1880s. New premises, now Central Primary School, were built and the School moved in 1881.

The two Endowed Schools remained in Derby Road until the early 1900s when the premises became too small. With the help of County funds, the boys moved in 1912 to the present building, the girls having moved five years earlier to Lady's Close.

The School became more fully a part of the maintained sector and took up Voluntary Controlled status in 1944. In 1990, a greatly expanded Watford Grammar School for Boys became a grant-maintained school controlled by its own Governing Body, independent of the County Council and funded directly by the Department for Education.

Mrs Fuller’s Free School: Three Hundred Years of the Watford Grammar Schools traces the 300 year history of Watford’s two Grammar Schools.  This unique book is quite deliberately preoccupied with people – Headmasters and Headmistresses; teachers, boys and girls; parents and administrators; Trustees and Governors. It shows how their combined influence and efforts over three hundred years have helped to achieve Mrs Fuller’s vision to an astonishing measure.

The editor of the History, Neil Hart, taught at the Boys' School from 1959 to 1994. He was successively Head of History, Head of Sixth Form, Second Master and Headmaster.

The School boasts its own archive which houses much of the rich history dating back over the centures.